Manz AG: Order for second tranche from AKASOL for a module production line at US location

08/20/2020 10:00:00 CEST, Reutlingen AKASOL confirms follow-up order for Gigafactory 2 at the Hazel Park site, USA | Positive project development for Gigafactory 1 at the AKASOL site in Darmstadt | Final acceptance of the line for Gigafactory 2 planned for the second half of 2021 | Total order volume amounts to around 20 million euros

Manz AG, a global high-tech engineering company with an extensive technology portfolio, has received the second tranche of an order from the German company AKASOL AG for assembly lines to produce lithium-ion battery modules.

Back in February, AKASOL had ordered the first tranche for a module production line for the new Gigafactory 1 in Darmstadt. A second, identical module production line for the Gigafactory 2 at the US-American location of AKASOL AG in Hazel Park, Greater Detroit, has now been confirmed. The total volume of both tranches amounts to around 20 million euros. Final acceptance of the line for Gigafactory 1 will take place at the beginning of 2021, final acceptance for Gigafactory 2 is planned for the end of 2021. The modules produced on Manz’s machines are, among other things, to be used in commercial vehicles and buses from one of the world's largest commercial vehicle manufacturers.

Martin Drasch, CEO of Manz AG, comments: “We are very pleased that our concept has convinced AKASOL as the German pioneer for battery systems in hybrid and fully electric commercial vehicles. The order for the second tranche for the US location is the result of our excellent cooperation on the Gigafactory project in Darmstadt and confirms our impression that, in addition to Europe and Asia, the US market is also picking up considerable momentum in the battery segment. With over 30 years of experience in production facilities for powerful and efficient battery systems, we want to benefit from the global trend towards electrification in a wide range of industries.”

Manz's machines are not only used to produce battery cells, modules and packs for the automotive industry and large vehicles such as trucks and buses, but also for power tools or consumer electronics, for example. 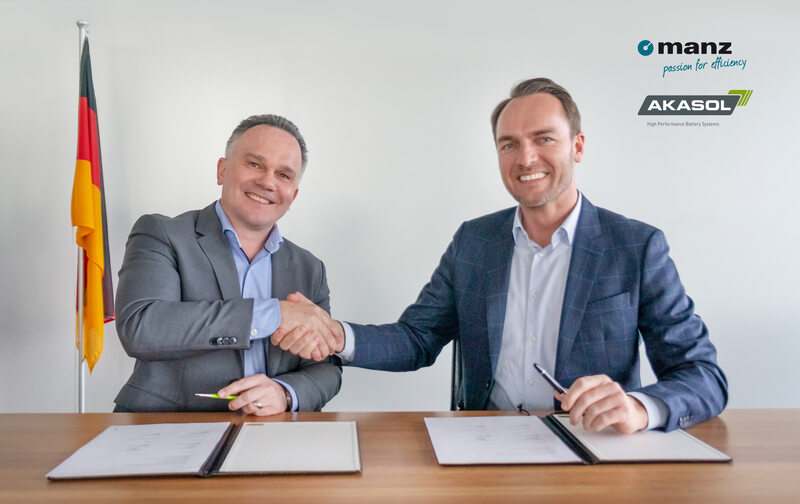 Martin Drasch, CEO of Manz AG, and Sven Schulz, CEO of AKASOL AG, at the signing of the contract in February 2020