Reutlingen, 9 May, 2012. High-tech engineering group Manz AG has strongly committed itself to one of the most promising PV markets in the world, India. The German cSi- and thin-film equipment specialist established itself on the subcontinent in two ways: it already has a seasoned client base and it has invested in an engineering education program to nurture local PV talent.

With more than 300 days of sunshine, India is predestined for tremendous market growth in the next few years. The Indian government threw in its support in late 2009 with the ambitious Jawaharlal Nehru National Solar mission. According to this program India aims to generate 20,000 MW of solar power by 2022; up from 550 MW in spring 2012. “We are well prepared for the lift-off of the Indian market with two whole ranges of highly integrated equipment – one for cSi and the other for thin-film, where we see potential especially for the CIGS technology”, says Dieter Manz, founder and CEO of Manz AG.

Manz India has been founded already in 2008. Beside its main office in Delhi, Manz operates local service hubs in Bangalore, Hyderabad and Kolkata. Right now, a new service center in Pune is under set-up. Therefore, experienced engineers support start-up, installation and service of Manz production systems in all the fast growing PV industry hubs of India.

Among Manz India’s early customers is Websol Energy Systems of Falta/West Bengal which was founded in 1994 already. Being a pioneer in India’s PV industry, Websol is recognized globally as one of the leading high-efficiency and high-quality cell manufacturers and has an installed base of 120 MW Solar PV cells & modules. At Websol, Manz’s back-end line equipped with a High Accuracy Printer (HAP) has been able to achieve high efficiency and throughput figures within a short ramp-up time. Websol's technical director says: “Manz long-term experience in inspection and metrology is offering us an outstanding solution for inline cell testing and sorting fully synchronized with Manz high accuracy printing. Besides German engineering and hardware we are very happy with the local service and support by experienced and skilled Manz India engineers.”

Talking about Indian engineers: since 2010, Manz supports private Amity University with PV manufacturing courses for mechanical and electrical engineers. These activities should soon evolve into an independent degree program called Solar Equipment Engineer. Amity University has about 80,000 students; its campus is located just south of New Delhi. In December, Manz CEO Dieter Manz was honored by Amity chancellor Atul Chauhan with an honorary doctorship in natural sciences. Dieter Manz: “For me, this honor is an incentive to make the degree program happen on which we have been working on for quite a while – to support the growth of the Indian solar market but also the growth of our own activities in India. So far, everything is on plan.” 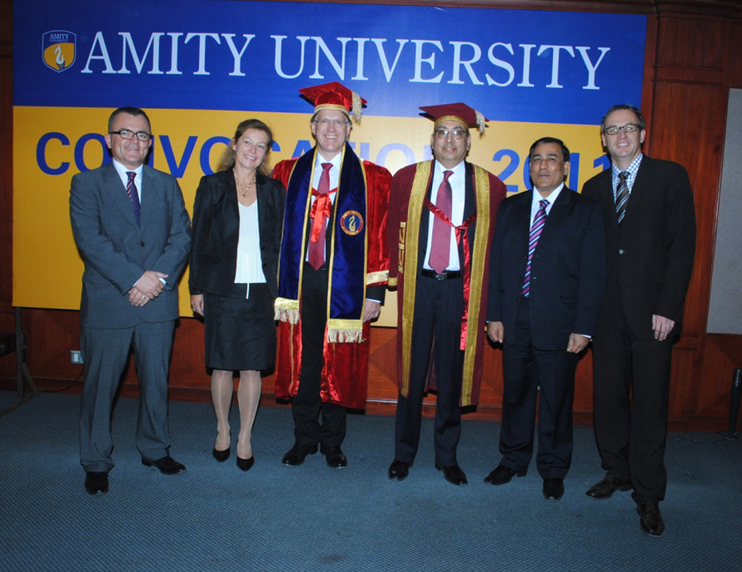